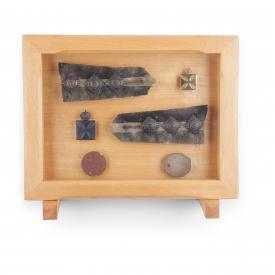 28 September 1918. Co-founder of Our Lady’s Nurses for the Poor, Captain Rev. Father Edward McGrath msc rescues a seriously-injured British Army officer from no-man’s land during an action on the Western Front. Father McGrath is serving as a padre with the 1st Royal Cheshire Regiment, a British infantry unit that has been thrown into the counter-offensive against Germany’s massive ‘spring push’ of 1918. Father McGrath hoists the man over his shoulder and carries him 300 metres back to the British trenches, an incredible feat of both strength and bravery. Three officers from the Royal Cheshires and the Royal Army Medical Corps testify to Father McGrath’s conspicuous valour. He is recommended for the Victoria Cross, Britain’s highest military award. The war ends six weeks later and the recommendation is never processed. This image shows Father McGrath’s epaulettes, hat badge and identification discs.