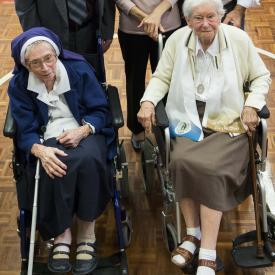 4 November 2018. It is with deep sadness that Our Lady’s Nurses for the Poor has announced the death of Sister Kathleen Conlan, who died this week at St Joseph’s Aged Care Facility, Kensington, in the 74th year of religious life.

Kathleen Mary Conlan was born in Ardlethan, NSW, on 20 August 1922, the eldest of seven children. She grew up on the family property at Binya and attended school at St Joseph’s, Leeton, NSW.

From a young age, Kathleen knew that she wanted to enter religious life. She contemplated joining an education order, but was daunted by the prospect of spending her life indoors. She found her vocation upon reading an article about the Brown Nurses in the Catholic Weekly.

Our Lady’s Nurses for the Poor – fondly known as the Brown Nurses – has performed unique ministry of healthcare, advocacy and friendship for the sick poor and disadvantaged for more than 100 years.

It was established in 1913 by a young Australian woman, Eileen O’Connor, and a Missionaries of the Sacred Heart priest, Father Edward (Ted) McGrath. At the time, there was no Government healthcare assistance, meaning that illness or injury placed a terrible burden on those with limited or no income.

Kathleen entered Our Lady’s Home, Coogee, in 1944 at the age of 21 and commenced nursing training at Our Lady of the Sacred Heart Hospital, Randwick. She was among the first group to take their vows when Our Lady’s Nurses for the Poor became a religious order in 1953.

Over the next seven decades, Sr Kathleen offered healthcare, advocacy, friendship and practical support to hundreds of people in need across the Sydney region. Many were suffering from mental illnesses or isolation.

Sr Margaret Mary Birgan, who recorded a conversation with Sr Kathleen shortly after her 90thbirthday in 2012, says Sr Kathleen helped to restore the dignity of life within many people throughout her long vocation.

“I tried to give most of my time to the poorest people,” Sr Kathleen said at the time. “The Lord told us, ‘The poor will always be with you’ and I was always very keen to help make life better for them. I just want to help people. I do it for the love of God and for the love of the work.”

In an article appearing in Catholic News marking her 70th year with Our Lady’s Nurses for the Poor, Sr Kathleen recalled caring for a woman who had been seriously injured in a car accident. “She couldn’t talk or walk so I just sat there with her,” she said.

“A physiotherapist eventually got her walking and she started working again. She wrote me a letter saying, ‘If you hadn’t come to see me I would have sat in a chair for the rest of my life. Something in you helped me to get up and do something with my life’.”

Sr Kathleen had an active religious life. She attended daily Mass at St Brigid’s Church, Coogee, was involved with numerous prayer groups and was a foundation member of the Australian Catholic Charismatic Movement.

Upon ‘retirement’, Sr Kathleen moved out of Our Lady’s Home to live independently at Queen of Intercessions, Randwick. Her door was always open to those needing help or company.

Likewise, she received a constant stream of visitors for prayer meetings, monthly Mass or sewing parties, and returned to her community at Our Lady’s Home for dinner on Sundays and special occasions.

When she wasn’t praying or crocheting, Sr Kathleen was an avid supporter of the Sydney Swans and could often be found at a home game or watching their progress on TV. Her Christmas puddings, made for her sister companions, family and friends, were legendary.

In 2013, Sr Kathleen was honoured with the NSW Premier’s Award for Community Service. The following year she received a Papal Blessing from Pope Francis recognising her 70 years of religious service, while a celebratory Mass was held in her honour at St Brigid’s in Coogee.

Sr Kathleen is predeceased by her parents Reuben and Minnie and brothers, Patrick, Thomas and John. She is survived by her siblings, Sr Mary FDNSC, Margaret, Denis and Frank, and her sister companions at Our Lady’s Nurses for the Poor.

A Mass of Christian Burial was celebrated at the Chapel of the Sacred Heart, Kensington, on Monday, 12 November 2018.