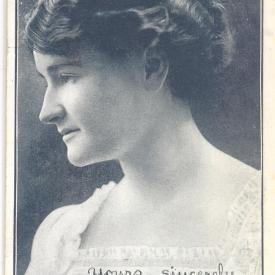 10 September 1914. Fundraisers organise a concert at Concordia Hall in Elizabeth Street, Sydney, in aid of Our Lady’s Nurses for the Poor. Headlining the all-star program is the world-famous Miss Ella Caspers, accompanied by her sister, Agnes. A contralto blessed with a ‘voice of gold’, Ella was born in Albury, NSW, and educated by the Sisters of Mercy in Goulburn. Following training in Sydney, a public subscription raised funds for Ella to study at the Royal Academy of Music in London. In 1911, she became the subject of a scandal that gripped London when she unwittingly married a bigamist. Ella returned to Australia, where her international career was promptly cut short by the onset of the Great War. The concert at Concordia Hall is widely reported in newspapers throughout Australia. One reviewer gushes, “She was in such beautiful voice that her hearers were inclined to rejoice in her enforced stay in Australia.” Ella Caspers recovered her career and became a popular recording artist in the 1920s.