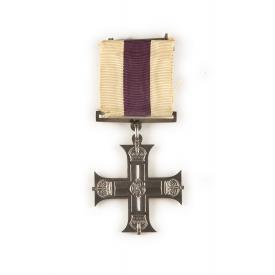 21 August 1918. Co-founder of Our Lady’s Nurses for the Poor, Captain Rev. Father Edward McGrath msc, is awarded the Military Cross for repeated acts of gallantry on the Western Front. Father McGrath is serving as a padre with the 1st Royal Cheshire Regiment, a British infantry unit that has been thrown into the counter-offensive against Germany’s massive ‘spring push’ of 1918. Several companies set off from Bucquoy village to capture a section of the Paris to Amiens railway in a bid to cut off a large German force. By dawn, the forward companies are still 500 metres short of their target, in full view of the German lines and without artillery support. Within minutes, hundreds of men are mown down by machine gun and artillery fire. Realising the impossible task facing the stretcher-bearers, themselves under fire, Father McGrath ventures into no-man’s land to assist the wounded. Standing 6’1”, he presents an easy target. Undeterred, he repeatedly returns to the battlefield to carry or drag casualties back to the dressing station. Father McGrath will be nominated for the Victoria Cross, Britain’s highest military award for gallantry, for another heroic act just a few weeks later.