Official opening of the Cause 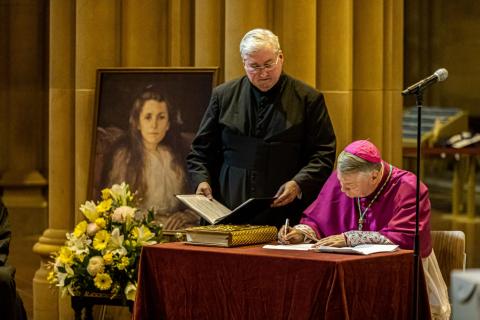 Archbishop of Sydney, Anthony Fisher OP, celebrates a Mass at St Mary’s Cathedral, Sydney, to officially open the Cause of Beatification and Canonisation of Servant of God, Eileen Rosaline O’Connor. In his homily, Archbishop Fisher says God makes far more saints than are recognised but that the Church is graced to recognise only a few. “For a century now the Church in Australia has kept alive the memory of the ‘Little Mother’,” he says. “So far Australia has only one recognised saint so can we produce more saints. Has our dry continent suffered a holiness drought also? We pray that Eileen O’Connor might be raised to the order of Australia’s second saint.” Full story. Image: Alphonsus Fok / Catholic Archdiocese of Sydney.