A long and generous vocation 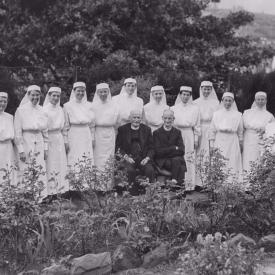 2 August 1951. The Catholic Weekly publishes this obituary for the Very Rev. Father Edward Gell, who was a generous benefactor and ardent supporter of Our Lady’s Nurses for the Poor throughout his long life:

“The Very Rev. Father Edward Gell, who died at Our Lady’s Home, Coogee, on Wednesday of last week, was pastor of Ryde for 42 years of his priestly life. Father Gell, who was 84 years of age, had been a priest for 54 years.

“His Eminence Cardinal Gilroy presided at Solemn Requiem Mass for the repose of Father Gell’s soul in St. Charles’ Church, Ryde, last Friday morning. After Mass, the Cardinal Archbishop gave the absolutions at the catafalque bearing the late pastor’s coffin surmounted by his biretta and chalice. More than 100 members of the diocesan and regular clergy chanted the Mass on Friday.

“The late Father Gell was one of Sydney’s best-known and revered priests. Since he retired, through ill-health, he had been chaplain of Our Lady’s Nurses for the Poor at Coogee.

“Born at Bathurst in 1867, Father Gell was the son of a Bathurst pioneer, an architect who designed Saints Michael and John’s Cathedral, St. Stanislaus’ College and other church buildings at Bathurst.

“Ordained in the Eternal City in 1894, he returned to Australia in the same year. Later he was stationed at Pyrmont from 1905 to 1906 when he went to Ryde. During his 42 years there, Father Gell was responsible for the erection of churches and schools in the Ryde and Gladesville area.

“He died at Our Lady’s Home and amongst those who had been his dearest work, the one nearest to his heart, a work he had nursed from its infancy. Had it not been for his help, most likely that their glorious work would have passed into the limbo of beautiful things that flourished only to fail. He loved that work, he loved those noble nurses.

“Fitting it was it should be they who would close his eyes in death and prepare his body for burial, fully clothed in his priestly garments as if prepared once again to go to the altar of God. These thoughts must have done much to brighten those last, long drawn days of infirmity which closed his life.

“Father Gell was a man loved by all who know him. He was blessed with the
world’s goods. God alone knows the good he did, his generosity was phenomenal. He was often imposed on, but never questioned when aid was sought.

“He never regretted what he gave, even when shown he had been imposed on. In regard to parochial matters, how much of his own money went into church and school funds will never be known. Bills were met and paid, that was his only concern.

“His was a vivid, trusting faith. He had the faith of a child. Without being a fool,
he could see all things as possible in God. “If God so designed, God could so do,” was sufficient for him. The love of Our Blessed Lady was ever dear to him.

“There were only four priests senior to the late Father Gell in the Archdiocese of Sydney. This grand old priest who is now dead will meet many, many souls, for he has out-lived most of them. They will be waiting for him.”

This image shows Fathers Edward Gell and Edward McGrath msc with the community of Our Lady’s Home, Coogee.