Hidden in the shadow of love 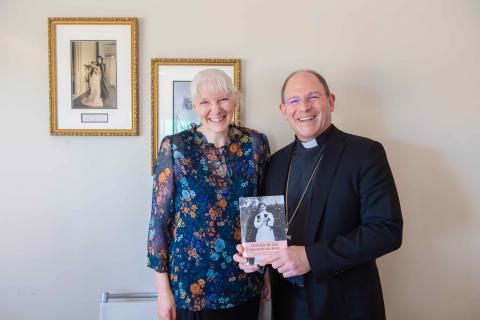 THE publication of a new book about the life of Mother Theresa McLaughlin and the early years of Our Lady’s Nurses for the Poor will further increase interest in Australia’s ‘saint in waiting’, Eileen O’Connor.

Our Lady’s Nurses for the Poor was founded in 1913 by a young Sydney woman, Eileen O’Connor, and a Society of the Missionaries of the Sacred Heart priest, Rev. Timothy (Ted) McGrath.

Both shared a deep devotion to Our Lady and the desire to establish a ministry of compassionate service to the sick poor in their own homes in her honour. At the time, there was limited Government assistance for healthcare, meaning that illness was an added burden for the poor.

In 1913, a small community of Catholic women gathered by Eileen and Fr Grath began their mission from rented premises in the beachside suburb of Coogee, NSW. Theresa ‘Cissie’ McLaughlin was the first to hear their call.

Born at Sodwalls, near Lithgow, NSW, in 1890 and educated by the Good Samaritan Sisters at Rosebank College, Five Dock, NSW, she was introduced to Eileen by her cousin, Fr Alphonsus Coen cp, who had asked if she’d like to meet ‘a saint’. Cissie later said that a tremendous joy settled upon her as she waited for the tram after one of her early meetings with Eileen – and that this joy never left her.

The seven foundation nurses and those that followed became affectionately known as the ‘Brown Nurses’ because of their flowing brown cloaks and pillbox hat, chosen by the co-founders in honour of St Joseph.

Cissie quickly became Eileen’s loyal deputy and played a central role in keeping the fledgling community together during the difficult early years and after Eileen’s death in 1921.

Revered for her kindness, humility, good humour and prayerfulness, Cissie proved herself to be scrupulously loyal to the ideals of the co-founders and gently guided the society towards becoming a religious congregation some 40 years later.As the congregation’s first Mother Superior, she oversaw the establishment of ministries in Brisbane in 1956 and Newcastle in 1962.

Speaking at a function held recently at Our Lady’s Home, Coogee, Bishop Anthony Randazzo described Dr Jocelyn Hedley’s new book, Hidden in the Shadow of Love, as a number of works rolled into one.

“This is a work of history, a subtle spiritual biography and an inspiring work of mission in action,” he said. “The moment you begin reading this book, you have a sense of being transported to another time, to another Sydney.

“You can imagine yourself being with Cissie as she wakes up for the first time as a member of Eileen’s community. You can see yourself riding the trams with the sisters as they seek out those in need of care.

“Dr Hedley writes with such tenderness that one can catch a glimpse of Christ in Sydney’s poor. It is possible to taste the poverty in which Sydney’s poorest lived and feel the great suffering of the illnesses borne by their bodies and souls as a result of that poverty.

“One can imagine their anticipation of relief from suffering as they waited for the encounter with Christ in the Sisters that fed, dressed and tended to their medical and spiritual needs.

Bishop Randazzo said Cissie’s dependence on God was both encouraging and refreshing. “There is an overwhelming sense of intentional smallness, intentional humility and rushing to the shelter of God’s providence,” he said.

“God gives her Cissie the strength to be herself a shelter for others, a rock of refuge for the less fortunate and a rock of stability amidst all the changes and challenges that beset Our Lady’s Nurses for the Poor.

“In Cissie, you find no boast and no airs, even when she must bear the responsibility of leading the community. One simply finds faithful service and sharing in the simple joys and challenges of the little band of sisters.”

The sisters’ tireless efforts are wonderfully reported in a 1951 journal entry: 1008 sick visited; attention given 10,233 times, 2920 meals provided to the poor at the Home; 608 parcels of food distributed; 918 parcels of clothing issued; 67 lapsed Catholics brought back to their faith; five souls converted – all this by the hands of 12 women.

Dr Jocelyn Hedley, who is also the author of And here begin the work of Heaven: The spirituality of Eileen O’Connor, says absence was a common theme in Cissie’s life.

“From childhood through until her final days, she is slowly stripped of so much that is of profound importance to her: her parents, her siblings, her home; then her spiritual father – Fr McGrath – and Eileen O’Connor herself,” she said.

“When some of the Nurses are sent to begin a new foundation in Brisbane, their leaving is described by Fr McGrath as creating ‘a big gap’—and perhaps no one felt this more so than Cissie.

Yet despite that sense of absence, Cissie, said Dr Hedley, “was yet present to so many, and was a mother to so many”, as Mother Theresa McLaughlin.

Dr Hedley likened Cissie’s vocation to that of the ‘Little Way’ of St Thérèse of Lisieux. Her days, she said, were “little, hidden, made up of a thousand, tiny, ordinary moments – although what is little in an historical perspective bulks large in a person’s life.”

Cissie’s life, said Dr Hedley, is rightly praised for its beauty in selflessness, for its utter surrender to the service of others, for its faithfulness in the little things. “Her contribution to Eileen’s journey towards very possibly becoming Australia’s second canonised saint is really beyond compare,” she said.

Cissie died in 1965 without seeing the wave of novices that were to enter Our Lady’s Nurses for Poor in the late 1960s and 1970s. At one stage, the congregation had almost 40 novices and sisters ministering throughout Sydney, Brisbane, Newcastle and Wollongong.

Today, the mission of Our Lady’s Nurses for the Poor remains as important as ever. Assisted by the ongoing generosity of benefactors and volunteers, the sisters continue to assist the sick poor in Sydney, Newcastle and Macquarie Fields. The Brown Nurses, a work of the Society of Our Lady’s Nurses for the Poor, conducts a mission for the poor and disadvantaged in the local government area of Sydney.

In 2017, the Congregation of Our Lady’s Nurses of the Poor came under the governance of the Sisters of Charity of Australia, thereby ensuring the charism of Eileen O’Connor and the legacy of the Brown Nurses is carried into the future.

Eileen O’Connor was proclaimed a Servant of God in 2018 and the Archdiocese of Sydney is continuing its investigation into the cause for her canonisation.

Dr Jocelyn Hedley and Bishop Anthony Randazzo at the recent launch of ‘Hidden in the Shadow of Love’. Photo by Giovanni Portelli, Catholic Archdiocese of Sydney.