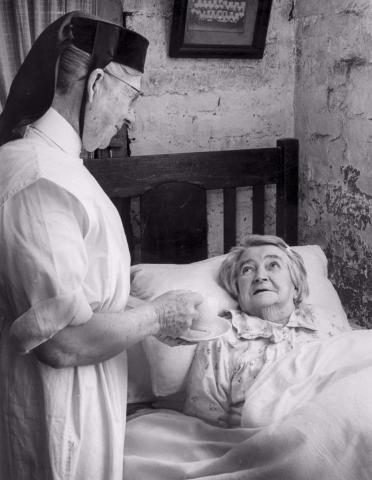 24 January 1915. Agnes (May) McGahey enters Our Lady’s Home, Coogee. May was born at Ryde, NSW, in 1888 and was educated by the Sisters of the Little Company of Mary and the Sisters of Mercy. She was encouraged to meet Our Lady’s Nurses for the Poor co-founder, Eileen O’Connor, by her parish priest, Rev Father Edward Gell. May became the second Mother General of Our Lady’s Nurses for the Poor in 1965, a position she held until 1974. May had a strong, commanding and dignified personality and was completely dedicated to the sick poor. Uncomplaining and always optimistic, she maintained that there was no problem that could not be solved by undeviating fidelity to Eileen O’Connor’s way. She died on 18 January 1979, the last of the seven foundation nurses. This image shows Mother McGahey tending to an elderly patient.