A devoted friend of Eileen 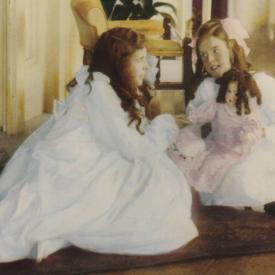 6 May 1943. Martha Perrottet, a staunch supporter of Our Lady’s Nurses for the Poor from the very beginning, dies after a short illness. Martha was the sister of foundation nurse, Katie Lynch, who died the previous June. Martha and Katie were born into a large pioneering family at The Welcome, near Parkes, NSW, and raised in an atmosphere of faith and piety. Martha and her husband, Frank, lived in Oberon St, Randwick, just a few blocks from Our Lady’s Home. Martha met Eileen O’Connor through their shared acquaintance with Rev. Father Edward McGrath msc and quickly became convinced of Eileen’s devotion to Our Lady. Martha and her three children, Francis (better known as ‘Bill’), Kathleen (pictured here with Eileen O’Connor) and Eileen, were regular visitors to Our Lady’s Home. Bill Perrottet was affectionately known to the nurses as ‘Boy’. Years later, he recalls: “My dear mother had a devotion to Eileen O’Connor which many would have described as fanatical. I have seen her gather up soil on which Eileen sat in the grounds of Our Lady’s Home.” An obituary in The Catholic Weekly describes Martha as an ‘exemplary Catholic’ and a generous charity-worker.