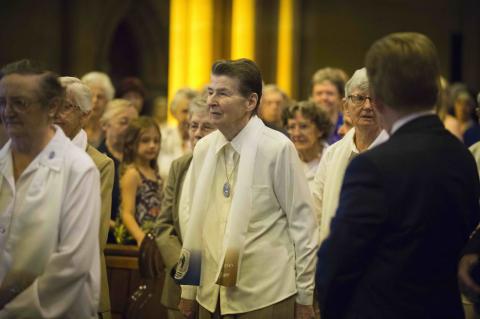 It is with deep sadness that Our Lady’s Nurses for the Poor has announced the death of Sister Anne O’Shaughnessy OLN in her 59th year of religious life. Sr Anne died peacefully at Sacred Heart Hospice, Darlinghurst, on Monday, 19 July 2021, following a short illness. She was accompanied by her family, friends and companions from Our Lady’s Nurses for the Poor and the Sisters of Charity during her journey home.

Sr Anne was born in Five Dock, NSW, the elder of two daughters (Anne and Margaret)  of May and Timothy O’Shaughnessy. Her father was born in Limerick, Ireland, and came out to Australia with his sister and brother-in-law in his early twenties. Her mother was born in Bundaberg of Irish parents.

Anne was educated by the Sisters of Mercy at Our Lady of Mercy College, Parramatta, and worked in a bank for several years after leaving school. Drawn to a vocation with a nursing or closed order, her father suggested Our Lady’s Nurses for the Poor. At the time, her parents lived in the eastern suburbs and knew of the sisters’ work in serving the sick poor.

About a week after her initial visit, Mother Theresa ‘Cissie’ McLaughlin asked Anne to consider joining the congregation. Drawn by the warmth of Cissie’s letter and the friendliness of the sisters, Anne entered the congregation in 1962 and underwent general nursing training at Our Lady of the Sacred Heart Hospital, Randwick.

By this stage, the congregation had grown to 24 sisters, including four of its foundation nurses – Theresa ‘Cissie’ McLaughlin, Agnes ‘May’ McGahey, Ellen ‘Nell’ Fitzgerald and Julia Cooney.

In later years, as the work of Our Lady’s Nurses Poor expanded into pastoral care, she completed a counselling course and worked at a crisis centre in Campbelltown for four years. Sr Anne also served as a director of the Brown Nurses, an independent ministry of Our Lady’s Nurses for the Poor that continues to serve the disadvantaged in the City of Sydney local government area.

Sr Anne had a great love for the sick poor and to make a difference in their lives. In a memoir collected in 2014, she spoke of the devotion of the sisters to the sick poor, to each other and the congregation’s co-founder, Eileen O’Connor.

“I have met some outstanding people in my ministry who, by their wonderful example, have taught me about love, faithfulness, devotion and outstanding care of family members,” she said. “I have been able, through the generosity of my congregation, to make life easier for some of them; bring support in times of sorrow and, one of the most important aspects of our apostolic work, to listen to them and see how they feel we can best assist them.

“One of my favourite quotes from Eileen O’Connor, is: “To give, to do, to save, to ease pain, sorrow, suffering, but above all and before all, to love with a great love.”

Sr Anne said the Gospel quote, “The poor will always be with you”, remained as relevant today as it was when the congregation was founded in 1913.

“Families are often scattered as work takes them to all different places so there are not the strong family supports as when the congregation first started its ministry,” she said.“Our work is still of great value to the poor and those in need.

“There will always be people that will fall through the cracks. We face a lot of social problems, unemployment, mental illness, drugs, gambling, alcohol, lack of education for those who were unable to cope with the education system, broken relationships, single parents and a lot of struggle for people trying to find meaning in their life and a health system unable to cope with all the demands.”

Sr Anne said she had an enriched religious life as a member of a congregation with a unique charism. “I thank my Congregation, which I have loved since the day I entered for the opportunities it has given me in education and renewal opportunities; the love and support of my sisters in religious life; and my beloved sister, Margaret, and her family,” she said.

“I am grateful because, no matter what situation I have been in, there has always been generous and wise people to advise and steer me on the right course. I have been able to minister to a number of people, improve their lives, bring consolation and hope to them in their times of sorrow and distress. They have enabled me to grow in virtue and, I hope, compassion.”

Sr Anne O’Shaughnessy, pictured at the Thanksgiving Mass held at St Mary's Cathedral, Sydney, in 2013 that celebrated the centenary of the formation of Our Lady's Nurses for the Poor.